The wonders of soup

I only have a moment, but I just wanted to stop in and say hi.

I had a bit of a hiccup (isn't this really spelled, "hiccough"? Why doesn't my spellchecker recognize it?) this week. After a busy weekend spent adjusting to our worship service schedule, I fell behind on laundry and cleaning and must have also fallen behind in giving the children attention and discipline because they were ill-tempered and ill-behaved and in no time at all, I was ill-tempered!

I woke up Tuesday morning (I have a history of bad Tuesdays that goes back to high school: everyone thinks it's Monday as what gets you, but really, it's Tuesday), anyway I woke up Tuesday feeling like the biggest failure that ever failed in the history of failings. My daughter was sulky and sassy, my son was fractious and sullen, no one had any clean clothes or towels, every dish in the house was dirty and I was exhausted! I was not in a good frame of mind!

I made a few quick adjustments to our class schedule and settled down for some decompression time (read: mindless activity on the Internet) while Man-Cub played with his Legos and caught up on a few cartoons. We had breakfast. We had lunch. And then, after the clouds has passed and my blues lifted a little, I turned to the one who always help me dig myself out such a hole, the one whose methods are foolproof: 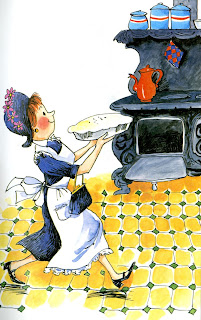 Good, old Amelia Bedelia. I loved stories about her when I was little! Even then, there was something that entranced me about salvaging one's day, mood, reputation or even job simply by whipping up the perfect dish! I relate to Miss Bedelia so very well: I try so hard to do what's expected of me and most of the time wind up leaving chaos in my wake. But I can cook!

Yesterday was a perfect example. I was feeling as if I'd just been scolded for tying steaks to the beans in the garden, unscrewing the light bulbs and carrying them outside, and hanging an unbaked loaf of bread up near the ceiling and then punching it down onto the floor. So, I made a short list, hied me to the grocery store and I got to cooking.

I made chicken noodle soup. The chicken noodle soup that everyone raves about and asks for. Once again I was amazed at how cheap and easy it is to make ($5 for a whole chicken and another $1.50 for a bag of egg noodles, the rest of the stuff I usually have on hand) and delighted at how excited my family (extended family included) gets over it.

There is something about a pot of something delicious bubbling on the stove that changes my outlook on life. Suddenly, I am capable, grown-up, sensible. Making soup somehow leads to folding laundry, sweeping floors and sloshing around in sudsy water in the sink. By 9:00 last night I had made soup, washed, dried and folded two loads of laundry, washed all the dishes, tidied the downstairs and swept the floors. Ok, I did have help, but it was nice to crawl into bed early last night knowing the house (and family) was back in order. Sure, the teenager was still a little sulky and the nine-year-old had to be spanked for defiantly disobeying his mother, but still not bad for an average Tuesday.

The benefits held over into today. We were able to have a great day in school (even finished early thanks to our first Latin test: 88%!), the house was tidied enough to have a dear friend over for an afternoon visit, and I was on top of things enough to bring leftover soup with crusty bread to Redheaded Snippet's game so we wouldn't miss dinner. Redheaded Snippet's team won their game, and Snippet played her little heart out so she was all pumped and in a good mood and everyone went home happy!

Ah...the return of order and routine. And to think, it all started with a pot of soup...

Posted by Pippajo at Wednesday, September 22, 2010