Sweeter By The Dozen

We paused during the week's chaos to attend the NJ Group IV field hockey championship game this afternoon. Redheaded Snippet's team is ranked first in the state and third in the nation and has taken the state title for the past 11 years. Straight. 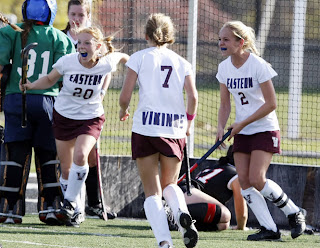 And today, they made it an even dozen. 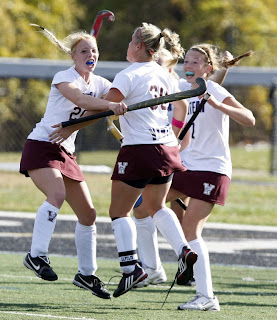 It was anyone's game for the first 30 minutes which ended with a scoreless tie at half time. But then, our girls pulled themselves together and managed to pull off a 2-0 win against a very formidable opponent. 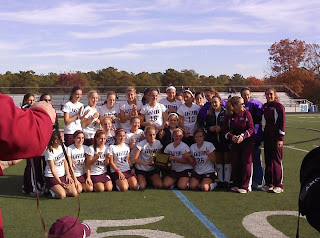 As an added bonus, the other team was not only talented and skilled, but classy, both on and off the field. There were no shouting matches in the stands, no obscenities screamed at referees, and no obnoxious cheers designed to distract and dishearten the players. And, yes, I've seen all of that happen this season and it's disgraceful. But when people remember this is just a game being played by children and behave themselves it's so much more wonderful! 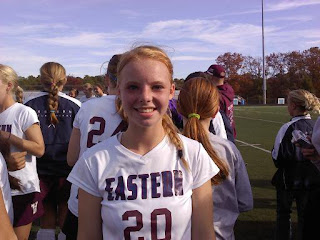 One of whom I'm just so proud of.
Congratulations, girls!

Labels: Life as a Hockey Mom 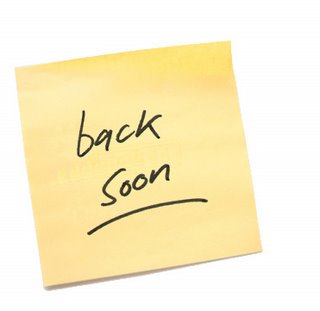 Mom is having back surgery tomorrow morning, Monday, November 8th. We have great hopes for what the procedure will do for her in the long run but expect her recovery to be long and slow. So, I probably won't be around in blogland for a while as I will be spending as much time as possible helping take care of her. Add field hockey playoffs, Thanksgiving preparations and, hopefully, a visit from Dharma & Co (due in part to both Mom's surgery and Thanksgiving) and my next few weeks are going to be quite the busy ones.

Join me, if you will, in praying for Mom tomorrow and in the days to come. And I'll be back in what I hope are just a few, short weeks.

Well, that was one fun-filled weekend and I, for one, am exhausted.

We made fondue, had a fire, made and ate pumpkin scones (with honey--divine!), had a fire, ran ourselves crazy through a corn maze, picked pumpkins, had a fire, had Welsh Rarebit and Witches' Brew for dinner, had a fire, carved pumpkins, put finishing touches on costumes, had a fire, almost hit a deer, had endless cups of tea, had more fire, dressed up and went trick-or-treating, then settled down with beef stew and cider to watch the kids exchange candy in front of yet another fire.

So, first, the pumpkins. Carving them took forever, first of all because Daria's weighed 85 lbs and filled two garbage bags full with its guts and second of all because Man-Cub managed to pick himself the hardest-shelled pumpkin we have ever encountered. It took several blows with a hatchet to get the top off! By the time we were finished, we were too tired to put candles in them and put them outside, let alone get photos. But we did snap this one because of it's sheer genius (no matter what you say, Daria). 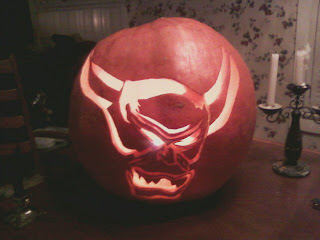 It's Chernabog.  I know what you're saying, "Oh, Chernabog, of course, that's right!"  I didn't know who he/it was either until Daria reminded me. 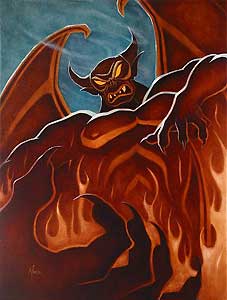 From Disney's Fantasia.  NOW do you remember?  He was one of the scariest images from our childhood so Daria just had to immortalize him on a jack o'lantern.

Next, the costumes.  Sadly, and because I am apparently the worst mother in the history of mothers, I have no photos of Man-Cub in his costume.  I know!  I made the mistake of allowing him to meet up with two of his little friends for trick-or-treating so the entire morning was spent in a flurry of phone calls, text messages and otherwise hysteria over exactly where and when they would be meeting, who would be accompanying them, where they would go and when they would be back.  I never expected that from a trio of boys.  Girl, yes, but boys no.  So by the time The Viking took him out to rendezvous, I was so frazzled I completely forgot to get out the camera!

I can show you what he was and we can all pretend the boy behind the mask is Man-Cub, 'mkay? 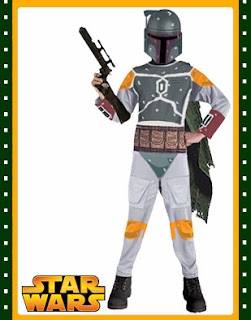 That's pretty much what he looked like with one very significant difference: Daria made him a spectacular jet pack out of Styrofoam, cardboard, duct tape and empty soda bottles.  She was up until the wee hours of the night finishing the thing but we didn't get any photos of it either.  Fail.

But, moving on, here is Redheaded Snippet, who went through my stores of costume supplies and decided to wear Daria's old lion costume from when she, Lobelia and two of our cousins did the whole Wizard of Oz thing one Halloween. 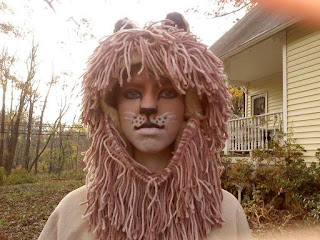 Obviously, this is a homemade costume.  Mom made that mane (affectionately known as "the mop") in one evening and never imagined it would be used again some ten years later.  Daria did the brown and white makeup and I did the black so it was very much a team effort. 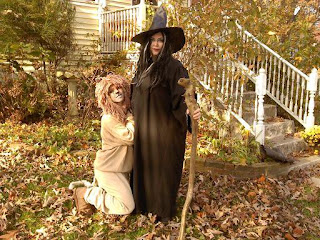 I decided to be a (rather unimaginative but still fun) witch.  We decided to try to come up with costumes from items we already had and other than the very inexpensive makeup kit we used for Redheaded Snippet (bought for less than $3 at CVS), we succeeded. 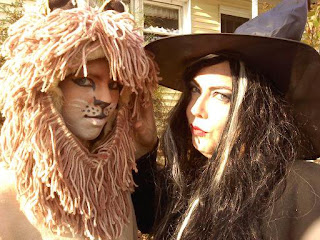 You can't really see it, but I'm petting her.  And that wig was ruddy annoying! 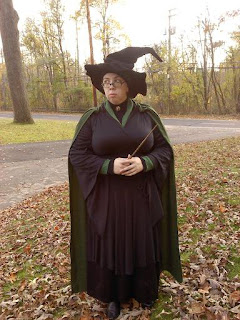 Daria, who hates having photos taken but deigned to appear in this one so her spectacular costume could be preserved for posterity, was also a witch, but not just any witch.  She made the perfect Professor Minerva McGonagall.  Again, we accomplished this with things we already had.  I bought her McGonagall's hat for her birthday several years ago.  The wand (a replica of Hermione's) was a gift from Daria to Redheaded Snippet one Christmas.  The cloak is from a Christmas pageant of yore and the rest are pieces from Daria's own wardrobe.  I must say, I was quite envious of her costume. 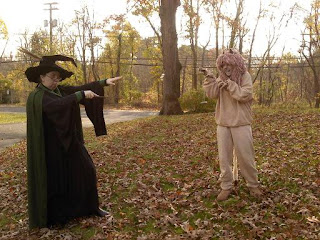 Redheaded Snippet kept hissing and spitting at Daria and she kept threatening to transfigure her into a mouse in return so I had to get a shot of this.

There are a few more shots floating around on our phones but I haven't been able to figure out how to get them onto the computer.  But once I do, you can be sure I'll post them.  So look for those right around the New Year, ha ha.

Anyway, the children had fun collecting sweets and trading them later, we had fun dressing in cloaks and robes and we all enjoyed the annual Halloween tradition of coming back home after curfew to smell the beef stew that's been simmering in the crock pot all day long!  We put away costumes, washed off makeup, The Viking built a fire and we all sat in front of it eating beef stew and reminiscing about the day and Halloweens past.

Another year of Halloween memories.  And now we look ahead to Thanksgiving...