Today's photos will be presented in chronological, instead of PHFR, order.  Because I feel like it.
First: Funny and Real (and, okay, Pretty in a masculine way, if such a thing exists) 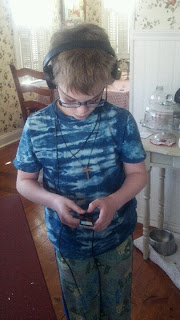 This is how Calvin appeared for breakfast this morning.  Crazy, mismatched (but you know they're his favorite) pajamas, headphones, and what is that thing an MP3 player?  I don't know what it is, but he was using it to be-bop his way to the kitchen.  I think he's adorable, but I bet you knew that.


Followed By: Real and Quite Puzzling and, therefore, Funny 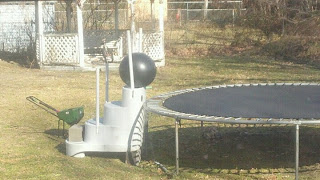 I got a good look at this while I was filling the kettle.  This "set-up" has been there for days, but today was the first time I actually paid attention to it.  What is going on here?  Those are the steps to the pool, the inside steps, which are supposed to be in the shed for the winter.  And that is Calvin's yoga ball desk chair which should have been in the classroom.  And that is the seed spreader, also supposed to be in the shed for the winter.  This has CALVIN written all over it but I really can't quite figure out what this was supposed to accomplish.


And Then: Happy and Pretty 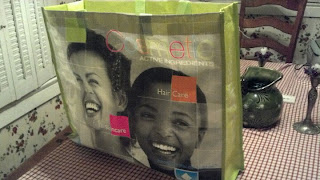 I hope you can truly appreciate the size of this bag.  It is enormous.  The Viking went to help with some renovations on his parents' new condo and Mom sent back with him this bag chock full of beauty products for me and Redheaded Snippet! 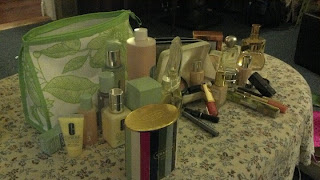 Mom has a friend who is a perfumer with a major cosmetic company.  There are certain items (often testers and samples) that employees are allowed to have and she often shares her bounty with her friends.  And Mom often shares her bounty with her family!  Her goody bags are so much fun to open!  We nearly wrenched the bag out of The Viking's hand when he walked in the door and excitedly cleared the coffee table to spread  everything out and get a good look at it!


And Finally: Funny and Delusional She thinks she gets it all, poor, foolish girl!  If I had had any sense at all I would have not told her the bag was coming, intercepted it in the driveway and hidden it away until her birthday.  But, clearly, I have no such sense and opted instead for the instant gratification of crowding in front of a mirror with her, trying on lipsticks, smelling cleansers and fighting over perfumes!  Which reminds me, I have a perfume to hide...

Where have you been able to find contentment this week?  I promise it isn't hard to find, once you start looking!  Join us and share what you've found!

Ok, so maybe the first shot doesn't have to do with haircuts or robots per se, but it certainly is pretty (if I say so myself)... 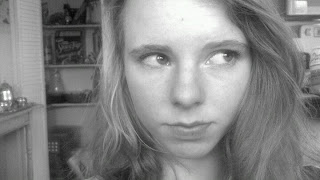 Self portrait.  She's always stealing borrowing my phone so when I find photos on it I consider them my property.  With which I can do as I please! 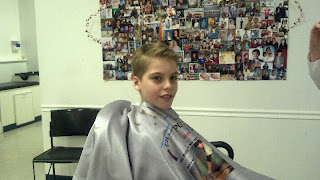 I wouldn't exactly call this pretty, but I would call it handsome, the masculine equivalent!  It was shearing time again (after 18 months of long-haired hippie shagginess) and again Calvin went drastic.  He seems to be like his mother that way.  We'll let it get really long and weird and then hack it all off! 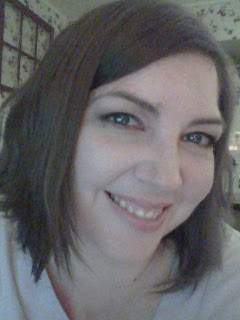 See what I mean?  It was SO LONG and, yes, for those of you with sharp eyes, good memories and nothing better to do, it was lighter.  I went darker and shorter about a month ago.  And I feel so liberated! 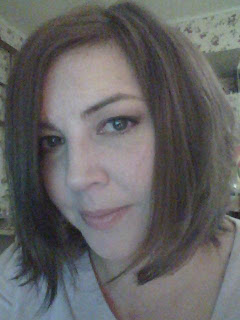 Dharma did it for me during our Christmas vacation.  I had always been a blonde but have been noticing over the past few years that my hair has gotten progressively darker.  And one day, I looked at my roots and realized I couldn't call myself even dishwater blonde anymore.  So I decided it was time to stop fighting nature.  And I love it!  I wish I had gone darker a long time ago.  It suits my eye color and skin tone better and even The Viking (who had always liked my hair lighter than darker) likes it (which was a relief). 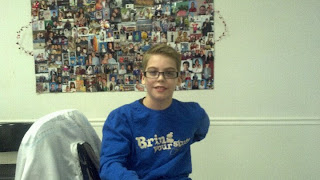 I wasn't sure how he would react once the shearing was over.  I really was concerned that once reality set in, he'd have haircut remorse.  But as soon as the stylist put his glasses back on him, his face lit up in a huge grin and he laughed!  He loves it!  He looks a lot older and he knows it!  That may not make Mama happy, but it sure makes a soon-to-be-eleven-year-old boy happy! 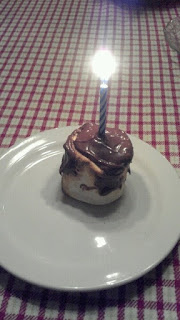 Being happy seems to make Calvin contagious.  A few nights ago, after dinner, he began quickly clearing the table all on his own without being reminded.  The Viking and I couldn't help but be suspicious.  We grew even more so when he reappeared in the dining room with matches, lit the candles on the table, dimmed the overhead light, and scampered back out to the kitchen.  If you're thinking, "What the...?" you've guessed what was going through our minds as well!

Next thing we knew, after a bit of clattering and clunking in the kitchen, we were presented with a surprise dessert, thought up and prepared exclusively by Calvin!  In case you're wondering, it was toasted giant marshmallows topped with Nutella and festooned with birthday candles.  And it was pretty darn tasty!  I'll make a foodie out of this boy yet! 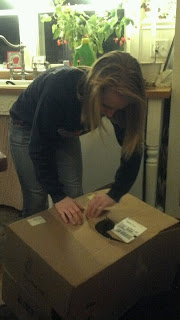 Mayhap you remember Robot, Calvin's creation?  Well, he is still around, taking up space in the living room (when he is not "in use") and we've all gotten used to seeing "him" walking around, playing video games, watching tv, playing with the dog, jumping on the trampoline (all things I wish I had gotten photos of).  And, the other day, Redheaded Snippet decided to get in on the action.  A few alternations were necessary of course... 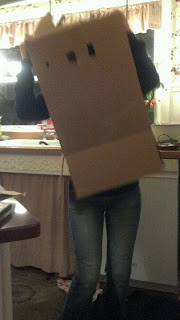 But it didn't take long for her to see what all the fuss was about.  He's just one super fine robot! 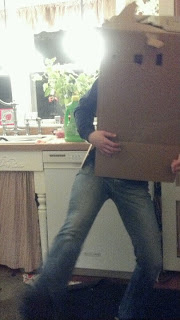 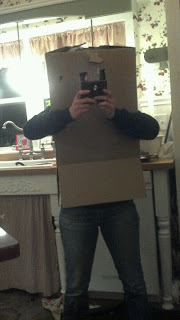 And, of course, Robot texts to let her friends know how cool and silly she is! 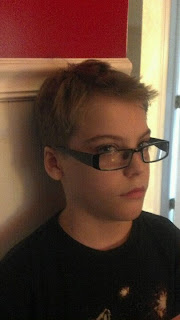 I was trying to get just one more good shot of the haircut and went a little too far, I guess.  I literally had him backed up against the wall!  I don't think it helped that this was right after our Shakespeare study--his least favorite part of the school day.  Oh well, he's still adorable (but don't tell him I said that!)

Where have you found contentment today?  This week?  Look around you, it's just waiting to be found!