I can't promise that this will be a completely comprehensive update, meaning I'm sure there will be things I'll forget to report, but it will be a start at least.

Another thing I cannot promise is that I am officially "back". Things are still at slightly elevated chaos levels over here and I don't know how often I will be able to get to the computer. I do miss it, though...

SO MUCH HAS HAPPENED and SO MANY THINGS ARE ABOUT TO CHANGE. It makes my head whirl, really. And I think the best thing is to try to record it chronologically.

I don't think this is going to be my most entertaining post ever. More like a mental purge. Bet you just can't wait.

Ok, enough with the disclaimers...

Last time I reported on anything substantial (besides butterflies, corn, and gingerbread houses which do have their place but cannot, unfortunately, be considered topics of subtance), Dad had just had surgery and school and field hockey were about to begin. So let's start there.

Dad has made a complete recovery, thank God. He came out of surgery with no complications, his recovery was relatively quick and no chemotherapy or radiation was needed. We consider that nearly miraculous. His health has also been much improved as a result of some other issues that were brought to light by his diagnosis. I am always humbled when God answers prayer exactly as we would like Him to. He doesn't have to do that. 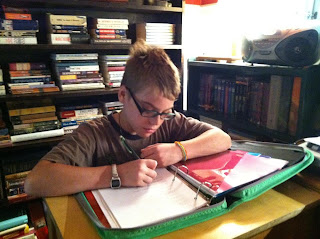 The part time job never materialized so Calvin and I set out to tackle the sixth grade in our third year of homeschooling in September as Redheaded Snippet began her (gasp) Senior Year of high school.

While not earth-shattering, we also had The Viking's birthday celebration.  I decided to draw on all of my accumulated cooking skills and prepare him a feast, the highlight of which was his favorite dessert: German chocolate cake. 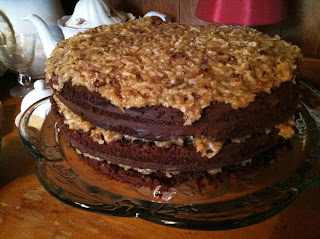 I am not particularly fond of German chocolate cake and had never made it before, but was pleased to see that it's just your basic chocolate cake with a sugary, coconuty filling and topping.  EZ PZ. 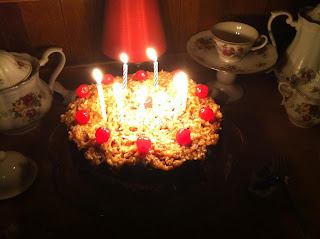 It did look rather festive and toothsome once bedecked with cherries... 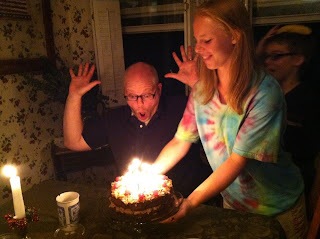 And, of course, The Viking had to ham it up for the camera... 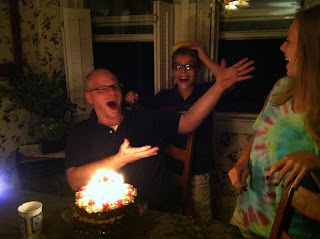 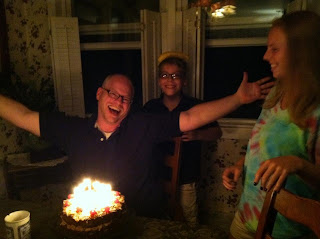 Um, yes, that is a banana on Calvin's head.  He proclaimed it his singing hat.  He's his father's son, that's all I can say about that. 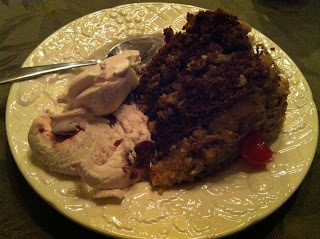 The Viking asked that I serve it with black cherry ice cream.  It was pretty good, if I say so myself.

With the start of school came the start of field hockey season and this one, Redheaded Snippet's last of her high school career, was another exciting one. 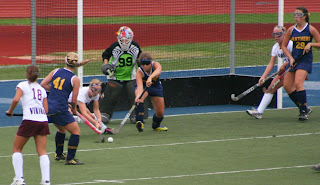 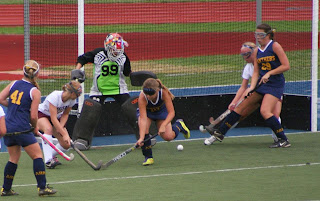 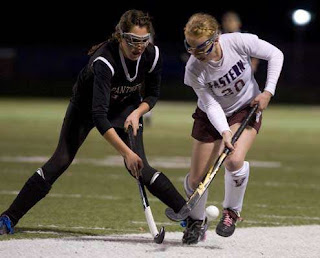 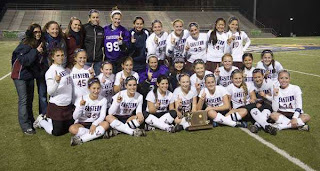 The team went undefeated for a second straight season, took their record-breaking fourteenth straight state championship and began and ended the season ranked #1 in the state and #1 in the nation.  It's been quite an experience!

Of course, before the season ended, Hurricane Sandy blew through.  Being located somewhat unfortunately in southern New Jersey, we were braced for the worst.  But, although many, many in our region were devastated by the storm, we never even lost our electricity!  My mom and sister were without power for a few days, but we squeaked through without a scratch.

We even managed to enjoy Halloween and another home-made, very thrifty costume. 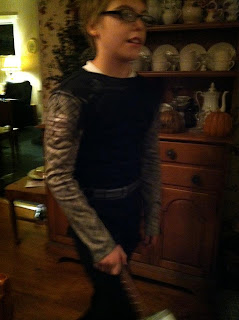 We started with a very generic one-piece black costume with grey sleeves that I found at a thrift store for $3.  I know it's blurry, but it's the only shot I got.  I spent an evening in front of the tv with a ruler and black sharpie drawing lines on the sleeves so it would pass for something somewhat chain mail-esque. 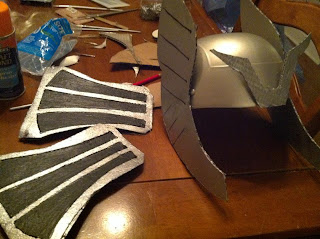 The Viking took the gauntlets that Daria had made for Calvin's Gimli costume last year, turned them over and painted them with black and silver paint.  Then I dug into my vast stores of costume bits in the attic and basement and found a stray helmet that The Viking was able to deconstruct and spray paint silver.  Then he made the ornaments out of cardboard, spray painted them and glued them onto the helmet. 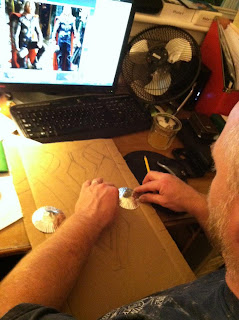 I wouldn't have been able to pull this one off without The Viking!  He then made a "breastplate" out of cardboard and foil candy wrappers.  And you can see, by what he's using as a reference, who Calvin had chosen for his masquerade! 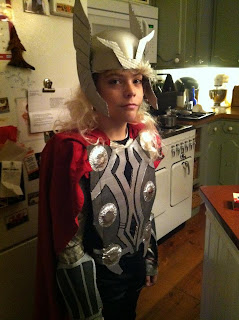 Yes!  It's mighty Thor!  We gave the breastplate and a red cape from my stores to Mom and she sewed them together lickety-split and then found a long blonde wig (also from my costume bins--they are abundant). 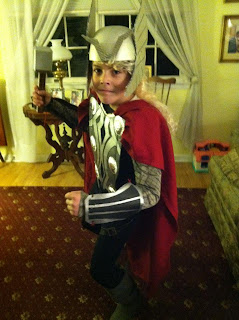 We had to buy a licensed and trademarked hammer and, if you look closely, you can see him wearing his sister's grey boots to complete the effect.  Not bad for a thrown-together costume, eh? 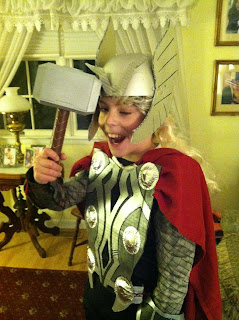 It did not take long for me to sorely regret that hammer. 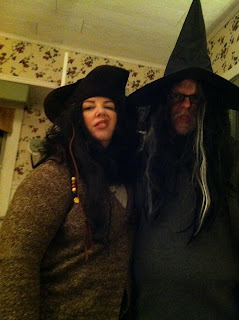 We just can't resist putting on something goofy to go trick-or-treating, even if it's just a wig and a hat.  That's just how we do. 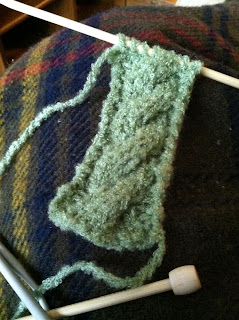 Somewhere along the way, Lobelia started teaching me how to cable knit and now I can do it without swearing out loud in English!  I do still swear in my head and in other languages out loud (British, German, and Wizard swears are dead useful for cable knitting), but I'm working on it.  Maybe I'll be able to finish a lovely hat by next winter!

And, then, next we knew Thanksgiving had come and gone and it was time to turn our attention to the next big step in our Redheaded Snippet's life: college. 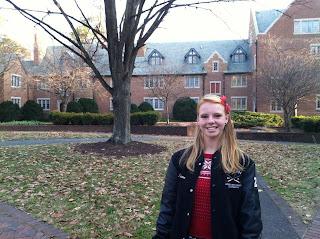 After a long, tortuous, and frequently discouraging and baffling process, Redheaded Snippet has finally committed to play field hockey for the University of Richmond!  I would not wish the recruiting/athletic scholarship process on anyone; it is not for the faint of heart and is incredibly confusing and stressful!  But do not think for a moment that I am not grateful for the opportunity our Snippet has to attend a school that The Viking and I could never afford!  The size, location, and hockey program are all perfect for her and it is all worth it to know how excited she is!  She really can't wait to get down there and become a Spider!

Once the college selection was over and we caught our breath, Christmas was barreling upon us.  And that is another post (along with Thanksgiving and some other very important things) entirely.

But before I go, let me just share this truly scary news: 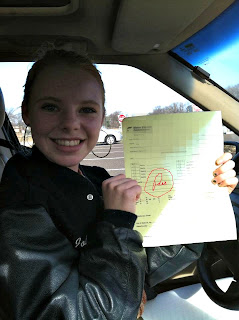 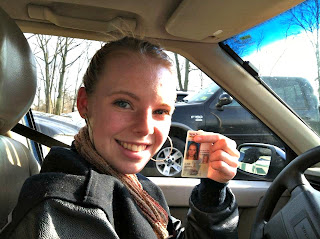 She's licensed.  And now I can send her to the store for milk.

That's all for now.  I have other things to share, but will need a much bigger block of time for that.  Hopefully, I'll get to it soon.

Posted by Pippajo at Thursday, January 24, 2013 No comments: