I simply could not think of theme this week.  This happens.  I'm ok with it so I think you should be, too.

Also, I am in no condition to categorize tonight.  You are going to have to infer for yourself exactly what is pretty, happy, funny, and real in this post.  I can't hold your hands all the time.

And so...in chronological order, we begin with an unexpected treat any time of the year (for frugal people like us), but especially in October: 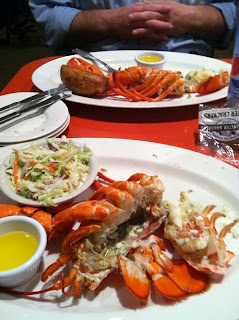 I had the opportunity to spend a weekend down the shore.  And because I am a ninny and somehow left my car and the keys to it in two different places, The Vicar had to come and rescue me.  And when dinner time rolled around we thought, well, we gotta eat, and we're down the shore, and it's practically a law that when you're down the shore you gotta eat seafood, and...I'm not sure how we justified going for the lobster part but we did and, you know, when in Rome...

Point is, if you're ever in LBI, in Surf City to be exact, check out the Blue Claw Cafe'.  Everything was fresh and delish and prices weren't bad for fresh seafood down the shore! 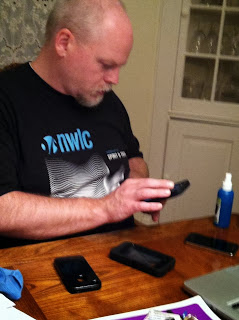 Ok, so maybe I can muster up enough strength to categorize a leetle bit.  I was sitting at the dining room table going through recipes and menus.  The Vicar was sitting near me doing...something.  I wasn't really paying attention.  But I suddenly sensed that he had been very still and very quiet for rather a long while. This is very unlike him.  So I looked up and should have known.  Some men bring out all of their guns to spread them out and clean them.  (And don't get me wrong, The Vicar does that, too, but) Others bring out all of their...what are these things?  Phones?  Does he have four phones?  Is that possible?  Do you see that I don't even know what they are or whether he has more than one?  I really have no clue what is going on here, but it has the rare ability to make The Vicar still and quiet for more than ten minutes (he wasn't even aware that I had taken his picture) and it amused me.  And so I share it with you. 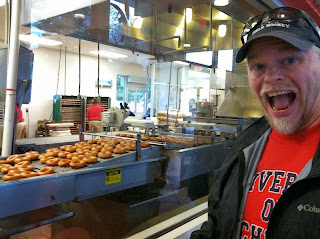 And then we took a trip to Virginia to visit Redheaded Snippet.  We hugged and laughed, we went out to eat, we watched a game, we got to know her (very sweet and very kind) roommate, and had an all-around good and much-needed time together.  Oh yeah, and while driving around looking for a place to resolve a potty emergency for one of us (who shall remain nameless),  we stumbled across The Vicar's favourite place on earth: 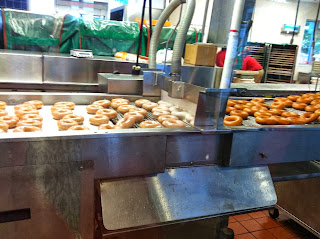 KRISPY KREME!  Where not only was the light on but you could actually watch the donuts being made and glazed right before your very eyes.  This is the liquid goo phase taking place. 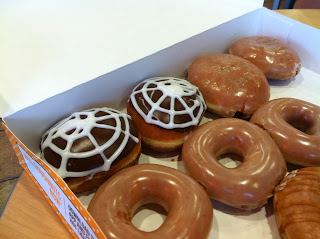 They had spider web donuts for Halloween.  And since the University's mascot is a spider, we bought a couple for Redheaded Snippet and her roommate. 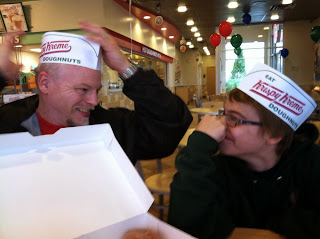 I love this shot.  They didn't know I was taking it and are just laughing at each other in their goofy hats.  They are so stinking adorable! 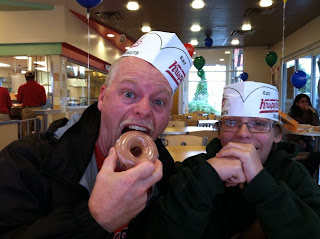 Of course, after a moment, they saw the camera and then this happened.  Calvin is just playing it cool.  The Vicar...well...this is pretty typical for him. 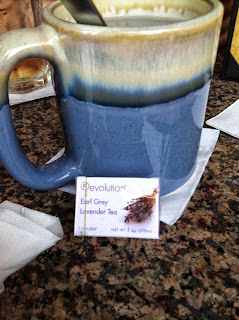 On our last morning in Virginia a most amazing thing happened.  We went out for brunch and I ordered hot tea.  And when the waitress came back and presented the tea selections in that fancy box many restaurants have, I was shocked to find it full of these darling little boxes of MY FAVOURITE TEA!  And not just MY FAVOURITE TEA, but the FAVOURITE TEA that I cannot find in the store anymore!  One store used to carry it and now they've closed.  I was so excited and the waitress was so delighted in my excitement that she slipped me three more small boxes when no one was looking!  She got a mighty good tip, let me tell you! And now I have three precious tea bags to save for special occasions! 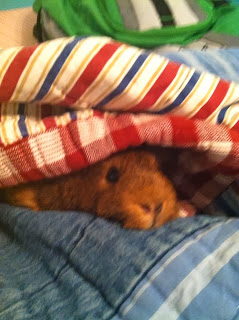 This is just a shot I found on my phone that I thought was pretty cute.  Calvin took it of his sweet, litltle guinea pig, Zelda.  He often takes her up to his room to frolic around on his bed while he does his homework.  It looks like he had her cuddled up in his blanket here and just wanted to record the memory for posterity.  He loves her so very much. 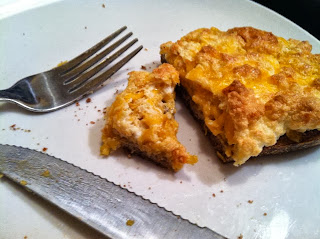 Here we have another favourite Autumn meal: Welsh Rarebit Souffles.  This recipe is from Two Fat Ladies.  I happened to catch a rerun of one of their shows years ago and they were making these.  Somehow, I had enough presence of mind to snatch up a pen and piece of paper and jot the thing down. 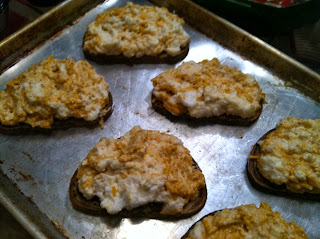 It's one of those quick, easy, inexpensive, and hearty meals that I love to make and my family loves to eat. Just toast up some good bread (in this case I used a marble rye but sourdough is another favourite), mix together 3 egg yolks with 2 cups of shredded cheddar, a good dose of Worcestershire sauce, a dash (or more, if you like) of hot sauce, 2 Tablespoons dry mustard, and salt and pepper to taste.  Then whip 4 egg whites to stiff peak stage, fold the whites in with the cheese mixture, then plop onto the toasts, making sure the bread is covered completely. 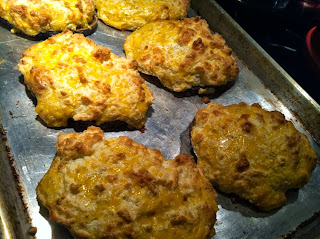 Bake at 350 degrees for about 10 minutes or until fluffy and just starting to brown.  These are great with our favourite Orchard Salad with apple and pear slices and an apple cider vinaigrette.  We especially like to eat it in front of the fire.  It's stick-to-your-ribs good! 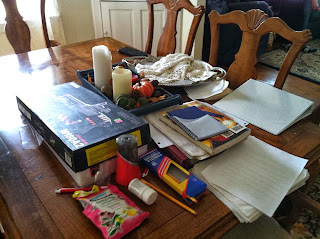 Finally, this, as my real submission, is what the dining room table looked like after what started out as a simple weekly chore turned into a fit of Let's-Clean-Out-My-Binder-And-Look-Up-New-Recipes-And-Meals insanity.  It looked like this for WEEKS as I was so exhausted from the effort that I could barely bring myself to look at it let alone clean it up.  I don't know what I was thinking.  I also don't know how to explain the large box containing a very vicious-looking air soft gun.  That wasn't me.  It played absolutely no part in the binder madness.

Anyway, I am happy to report that the table has since been cleared and the binder cleaned out.  Now we'll see if that helps me get my act together, meal wise.

Posted by Pippajo at Thursday, October 17, 2013 No comments:

So, in case you didn't know, Saturday was Museum Day Live! an annual event hosted by Smithsonian magazine in which participating museums across the country open their doors to anyone presenting a Museum Day Ticket... for free.  If you did not know about it, I'm sorry.  But I, myself, didn't know about it until late Friday night and so was unable to alert the masses, er, the three people that seem to read this blog with any regularity.

Anyway, scads of museums around the country participated, tickets were available online, Calvin and I needed something to do on Saturday (the weather being gorgeous and The Vicar being otherwise occupied all dang day), and a museum we've been wanting to visit was on the list so we up and went!

We went to the Glencairn Museum, part of the Bryn Athyn Historic district in Pennsylvania.  Once a private home, it is now a museum housing mythological and religious antiquities from all over Europe and the Middle East. 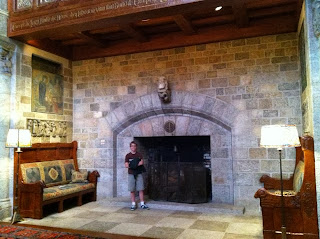 I have always loved having a son who loves art, history, and museums in general.  He wanted to look at everything and read every plaque.  He got a big kick out of this fireplace! 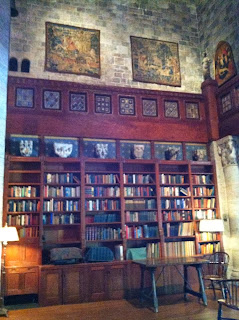 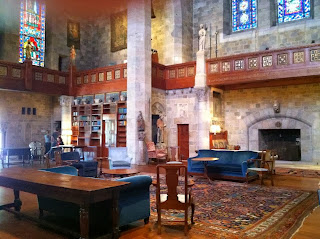 Calvin and I both figure that if the world of Harry Potter were real and we had been able to attend Hogwarts School of Witchcraft and Wizardry, we would both have been sorted into the house of Ravenclaw.  We've also been working on trying to make his room look as much like a Ravenclaw boys' dormitory as possible. We decided this room pretty much fits what we imagine the Common Room would look like.  Calvin wanted to live here. 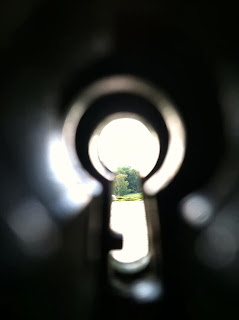 Through the keyhole, trying to catch a glimpse of the beautiful grounds beyond. 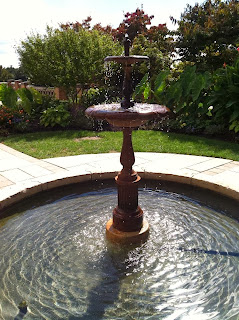 The fountain in a small garden tucked away in a courtyard.  It was so restful and soothing.  Now Calvin is after The Vicar to install one somewhere on the church property! 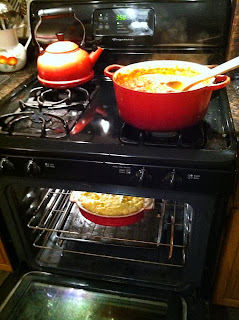 Something about the Autumn air makes me want to cook up all sorts of hearty, delicious things.  It's like this every year.  Something about the Winter air makes me want to cook, too.  And I like cooking pretty well in the Spring, as well.  Basically, I hate cooking in Summer and am always just so glad to get back into the kitchen when Autumn rolls around again that I sometimes go a little nuts. 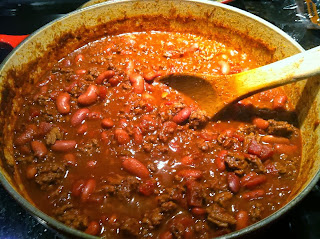 But sometimes, when the air is crisp and the leaves are starting to fall, you just need a big ole pot of stick-to-your-ribs, man-pleasin' chili!  I love chili!  It's so easy and inexpensive and The Vicar's eyes just light up whenever he's seen that I've made it.  WIN! 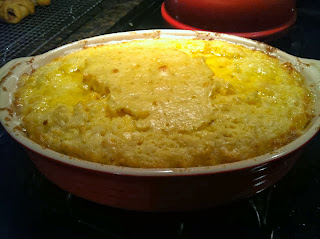 And what's chili without cornbread?  Well, I'll tell you: DOWNRIGHT STUPID.  Chili without cornbread is like French onion soup without that thick slab of bread floating on the top.  So, yeah, unthinkable is what it is.  In this case, I've made corn pudding which is even better (if you can imagine such a thing) than cornbread.  It's a cornbread that must be eaten with a spoon.  And talk about easy! 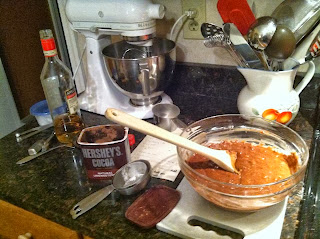 And then, of course, there was the night the bananas were threatening to turn.  I could smell those bananas throughout the entire house and just knew if I didn't light that oven and start rummaging around in my baking cupboard I was going to wind up with a soggy, banana-scented fruit fly condominium on the kitchen counter. 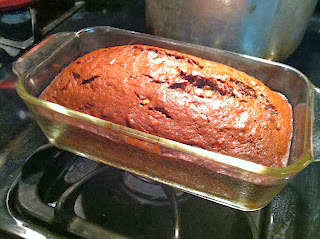 And, lo! banana bread to the rescue!  Chocolate banana bread, to be precise.  I tried to make it chocolate banana rum bread but, apparently, I didn't use enough rum.  The Vicar did that thing I love where he mumbles that this is awesome with a mouth so full I can hardly understand him.  Still, next time, next time, he will taste rum! 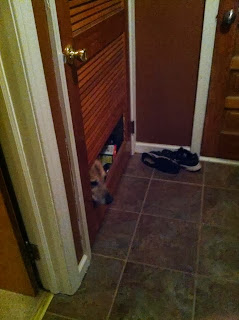 Months ago, Nutmeg broke through this door in her frantic attempt to escape the basement and be ever closer to The Vicar (she is seriously obsessed with him).  We haven't gotten around to fixing it yet. Yesterday, the big galoot found a use for it when it came time to vacuum.  She always disappears when the big, bad, noisy monster comes out of the closet, but this time we couldn't find her in her usual places.  Calvin found her hiding behind the door with her head poking through the hole she had made. 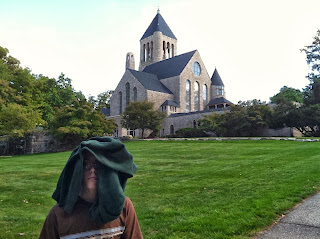 This was the only closeup shot I was allowed to take of Calvin during our tour of the museum.  Don't ask me why he had to have the sweatshirt balled up on his head.  It was one of the conditions he insisted on before giving consent.  I think, perhaps, he thought if he gave me a bad photo of him, I would be loath to use it and he would, in his passive-aggressive way, win the photo battle.  He don't know me very well, do he?

Posted by Pippajo at Wednesday, October 02, 2013 No comments: