So this week's installment is bugging me.  I'm just OCD enough to be irritated when I don't have a clear cut selection for each category.  I like to categorize things most of the time and get twitchy when lines are blurred.

For example, many of this week's photos are positively, frustratingly real and while they have the potential, nay the probability, of prettiness in the future, I'm not sure I can declare them satisfactorily pretty.  And I've been leaning dangerously close to grumpy as our first real heat wave sets in (ok, maybe not in terms of the official weatherpeople's criteria of being over 90 degrees for three days, but in laymen's terms, if I have to do outdoor chores with a hand towel in my belt loop for two days straight, that's a heat wave) so contentment has been a tad more elusive lately!

But enough of the shilly-shally. 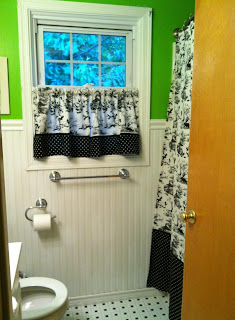 Let's start with the actual pretty.  This was part of our project blitz weekend but I wanted to save it for this week's post.  We FINALLY have a covering on the bathroom window!  And I would like to explain this a bit because it makes me feel moderately brilliant.

And lo! I did.  And then I got Mom over here.  We cut off the bottom of the shower curtain and used it to make a cafe curtain and a valance (not shown because it isn't finished yet), then went and got some black and white polka dot fabric to replace what we cut off and add to the other pieces.  I had really been hoping to find some black and white ticking or a crisp striped fabric but they were not to be had and I really do like the whimsical and classic polka dot.

I am not kidding; these curtains bring a smile to my face every time I walk into or past that room.  Which would also qualify that photo as Happy, too, wouldn't it? 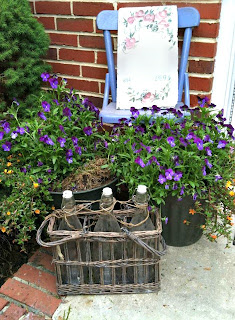 Remember this?  Although I only did that a few days ago, I've already changed it up because I realized that chair is going to deteriorate rather quickly out in the elements and I don't want that to happen AND Mom and I thought of something better! 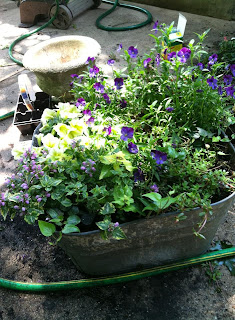 I've had this old washtub lying around for years.  I got it either at a yard sale or in the trash and have always wanted to use it as a planter.  But as there weren't no hole in the washtub and we were loath for some reason to put one in it, we used it for things like washing the cars, hauling small amounts of dirt, and storing drinks on ice for backyard parties.


THEN.  When we were moving and asking the perpetual question of, "Are we bringing/packing this," The Vicar pointed out to me that the old washtub did indeed finally have holes in it.  He wanted to throw it away, foolish man.  But I knew my long-hoped-for dream of having flowers in the washtub were about to become a reality. 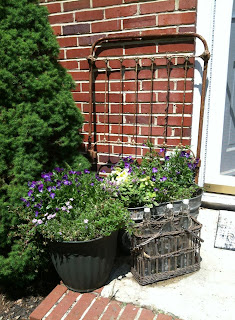 And then there was this old wrought iron headboard I had gotten, also years ago, also in the trash.  Honestly, The Vicar thinks I am plain old nuts when I drag home old rubbish like this.  Especially when I let it sit in the basement/shed/backyard for years while I wait for inspiration and opportunity to plunk down on my head.  Mom and I had already decided to find a vine to plant so we could use the headboard as a trellis when, in a flash of true inspiration, it occurred to me that we should use the headboard and washtub together.

Which leads me to: 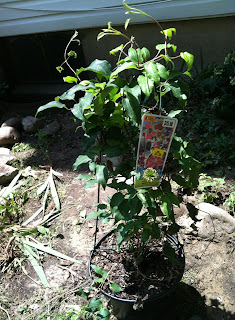 Inspiration is knowing you must have a clematis to plant next to your front step to grow up and all over the old, gnarly, but totally cool wrought iron headboard you're propping up behind the old, beat up, but also totally cool metal washtub on your front porch.  Happiness is finding a sad-looking one that is an obvious victim of neglect at Lowe's and guilting the salesperson into letting you have it at half price, knowing your gardening fairy of a mom can nurse it back to health in no time at all. 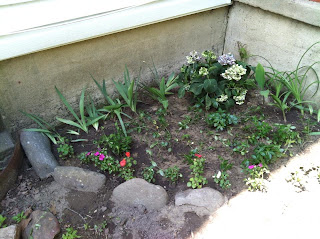 When we moved in, this area was covered with a piece of plywood and we kept our firewood on it.  Now it's on its way to being a lovely flower bed thanks, again, to Mom.  Hydrangea, irises, lilies of the valley, impatiens and creeping myrtle, for anyone who's curious.  And those rocks were all found in the backyard (and hauled into place--mostly) by  Calvin. 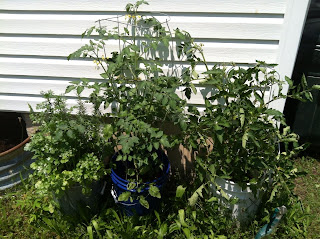 The Vicar's only attempt at veg this year with a bit of fresh herbs on the side.  My husband does love having fresh, homegrown tomatoes in the summer and was happy to find that the southern side of the house gets full sun all day long.  And though they look a wee bit wilted here, they are doing rather well.  Mmmm...Caprese salad is calling my name... 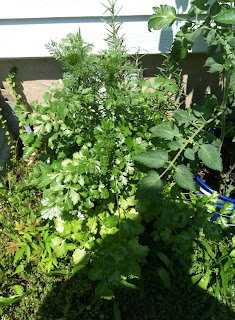 And these are my herbs.  The Vicar tends to them but they're mostly mine.  Mint, rosemary, and cilantro.  I also have a basil plant on my windowsill that I've managed to keep alive since mid March.  We love being able to go out and pluck a few leaves of mint any time we want some mint-iced tea.  Or juleps.  Or mojitos.  But, for some reason, I keep forgetting I have cilantro.  Must remember to get some avocados next time I'm at the store! 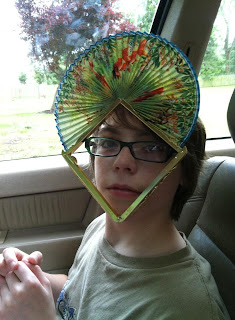 Today's funny is brought to you by twelve-year-old boys who get bored in the car and rifle through Mom's purse.  Yes, I keep a fancy fan in there.  Dead useful thing to have in one's purse.  I highly recommend it.

Starting out Happy then veering off into possibly Funny and Real 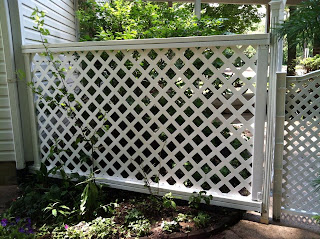 Now, stay with me here.  Don't be fooled by the seemingly boring nature of this photo.  I know there's not much to see here but look at that small tree on the left.  Yes, it's a tree, that's the point.  We're having a tree taken down in the farthest part of the backyard.  So the tree guy was here yesterday.  And it just so happened that Mom was tinkering around in this flower bed and wondering what this plant was and casually asked the tree guy if he knew what it was.  And he did.

So, yeah, it's a pear tree.  An apparently expensive ornamental pear tree that nature has just blessed us with...um...naturally.  The tree guy said they grow fast and are beautiful and much coveted for their spring blooms and autumn foliage.  We were so excited.  I had visions of hanging a partridge decoration in it somehow and was ready to start looking for such a trinket but decided to look up info on the tree itself first.

And that's when things got real.

It's a Bradford pear, which the TG told us.  Which means it will get HUGE which the TG did NOT tell us.  And they have shallow roots, are top-heavy and easily split and topple over in windstorms.  WHAT UP WITH THAT, TG???  So, clearly, this thing cannot be allowed to flourish mere feet from the house.  And now, in contrast to being romantically giddy about having it appear as if by magic in our yard, I am afraid of it.  I want it gone.  It could actually kill us in our sleep, but maybe I'm letting my imagination run away with me again... 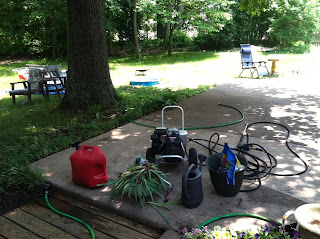 So, these shots are of the mess it seems you must create in order to improve your yard.  I think it actually looks worse than when we moved in!  I guess it's like any home improvement: it always looks worse before it looks better!  As perhaps you can tell, The Vicar has been power washing anything that can stand it and having a marvelous time at it.  And Mom and I have been planning and digging and planting and watering. 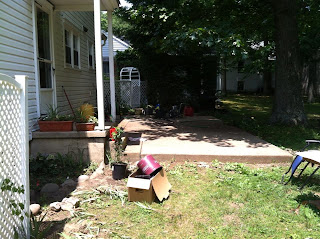 Or at least Mom has, and like a giddy schoolgirl, I might add.  I discovered something this week.  I can't say that I'm really contented with it, but I do feel that it's better to know the truth than waste time wondering, you know?  But anyway, I discovered, after decades of uncertainty, that I seriously dislike gardening.  In fact, I think I could go as far as saying I hate it.  I know, I know.  I'm disappointed in myself, like I'm admitting that I don't really like children or ice cream or bacon.  Come to think of it, I don't really like children.  Except my own.  And my nieces and nephews.  And a few other friends' children that I've gotten to know.  But I'm not one of those people who just loves children.

I don't really like animals all that much, either, truth be told.  I am just a soulless void inside.

As far as ice cream and bacon are concerned, we're good. 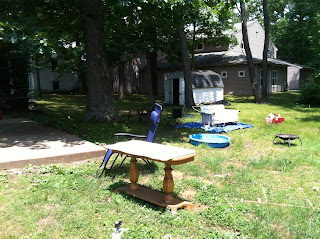 All this for a silly graduation party, can you believe it?  We must really love that girl or something.  But it's going to look beautiful when it's done and then, THEN, oh, the Pretty and Happy pictures I will have to share!

But until then, join us each week as we practice capturing contentment in our everyday lives.  Every Thursday at Like Mother, Like Daughter.