A thrill of hope, the weary world rejoices 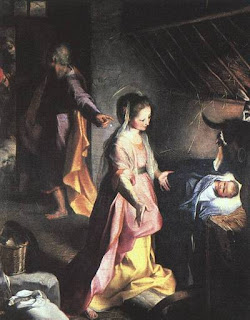 This year, instead of feeling the panic of being in a runaway train careening down a mountainside toward an abyss below, I'm feeling the anticipation and mounting excitement of the final week of Advent!

The air feels thick with expectation: It is coming! HE is coming! Come, thou long expected Jesus!

This is our second year marking Advent in our imperfect, faltering way. And it does make a difference. Things are calmer, more peaceful. There are moments of stress, but mere moments, not an entire MONTH'S-worth of it! The tree is up, the lights are up, the house is clean (for now). There are still a few gifts to buy, many more to wrap (haven't wrapped anything yet), and a spectacular feast to prepare and shop for. But I'm not worried. We are getting ready to CELEBRATE!

We went with dear friends to a local church that has one of the most fantastic living nativity displays I've ever seen. Calling it a nativity is quite misleading as the "show" begins with the creation of the universe and ends with Christ's ascension into Heaven after his resurrection. It takes over thirty minutes to view all the "scenes" which include the prophecies of Christ's birth, the angel's visits to Mary, Joseph and the shepherds, a stroll through the center of Bethlehem where there was no room in the inn, the manger scene, the wise men's visit to Herod and their subsequent visit to Jesus Himself, Jesus calming the stormy seas and raising Lazarus from the dead, and His crucifixion, resurrection and ascension.

I had our friends' youngest daughter, a precocious (and, as I appropriately mistyped, precious) four-year-old, by the hand and was steering her through all the scenes and answering her many questions, some hilarious, some profound and some hilariously profound. Just after the crucifixion scene which was simply a tableau of the three crosses of Calvary and a voice-over describing what happened there, she said to me, "Why did Jesus die for all of us for our sins?" I looked desperately for her mother, thinking it would be best for her to field such a question but as she couldn't be found, I took a deep breath and faltered, "He didn't want us to have to die--...He knew we couldn't pay the price and so--...He wanted us to be in Heaven with Him--..."

I could see by her face that my attempts had only raised a dozen more questions so I stopped and bent down close to her. "Because He loves us." And she smiled, nodded and understood. Later, as we were enjoying hot chocolate and cookies I asked her what her favorite part was, expecting her to mention the angels' choir flying over the tree tops, the cute sheep grazing in the shepherds' field or the drama of the boat rocking violently on the stormy sea before Jesus calmed it. She surprised me by saying, "The part when Jesus died for us."

And a child shall lead them.

Merry Christmas
For yonder breaks a new and glorious morn!